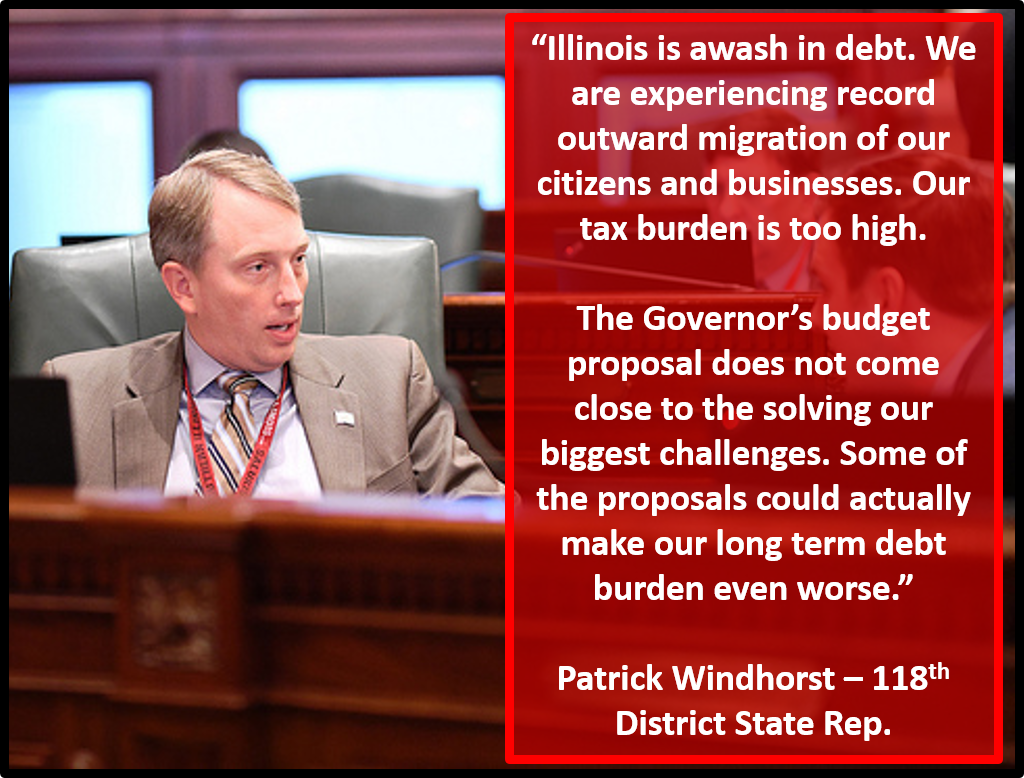 This week’s edition of the Windhorst Weekly focuses on my reaction to Governor JB Pritzker’s first combined State of the State and Budget Address given before a joint session of the General Assembly on Wednesday.

Illinois is awash in debt. We are experiencing record outward migration of our citizens and businesses. What I heard from the Governor unfortunately does not come close to the solving our biggest challenges. Some of the proposals could actually make our long term debt burden even worse.

The entire proposal is not a loss, however. I am encouraged by some of the Governor’s proposed investments in Pre-K through 12th grade public education, and a 5% increase for higher education.

Much of the Governor’s proposed spending plans will rely eventually on the passage of a so-called progressive income tax. That is going to take a Constitutional Amendment to achieve, and won’t be on the ballot for consideration until 2020. For now, the progressive tax is a wish, not a reality for the Governor. It is my hope that he will budget and act according to what we are currently bringing in, not on phantom revenue projections from even more new taxes.

Before we get to more of my reaction to the Governor’s address, I have been busy both in the district and in Springfield meeting with groups and hearing from my constituents. Thank you for reading!

SIU Saluki State Capitol Lobbying Day
It was my pleasure to welcome and meet with several students from SIU Carbondale in Springfield for the SIU lobbying day. The students met with myself and Rep. Terri Bryant, and even spent some time with Governor Pritzker in his office.

Springfield….First-term State Rep. Patrick Windhorst (R – Metropolis) says he is concerned for the future of the State’s finances after listening to Governor JB Pritzker deliver his first combined State of the State and Budget Address on Wednesday.

“I thought the Governor gave a pretty frank assessment on the State’s financial condition today,” Windhorst said. “But, I was bothered by the fact that the Governor seemed light on details when it comes to really addressing our challenges as a state,”

Governor Pritzker proposed expanded gambling, legalizing marijuana for adult recreational use, and raising taxes on insurance plans to close a projected $3.2 billion deficit for next fiscal year.  Pritzker also spent a significant portion of the speech promoting the idea of a new progressive income tax system for the State.

“To me, the speech was clearly meant to paint a bleak financial picture and leave listeners with the impression that there is not any other way to solve our problems than to raise more taxes,” Windhorst said. “I happen to believe that $39 billion dollars ought to be enough to run the State of Illinois. We just raised the minimum wage to a totally unsustainable level, and now we are talking about taxing more products and enacting policies that will likely cause more people to leave the State.”

“With over $100 billion in pension liabilities and debts already owed, skipping a pension payment to pay for more programs is a mistake, and one that has been made before,” Windhorst said. “We won’t solve the pension crisis by kicking the can down the road and shifting the burden to our kids and grandkids.”

“Unfortunately the Governor acting as a sort of ‘promoter in chief’ won’t be enough to change the minds of business owners that are looking for more business friendly neighboring states,” Windhorst said.  “Just because there are a lot more Democrats in charge in Springfield does not mean that there’s a whole bunch more money coming in. In fact, with Democrats in total control of the legislature for the last 14 years, Illinois leads in outmigration, property taxes, overall tax burden, unpaid bills, and pension obligations.”