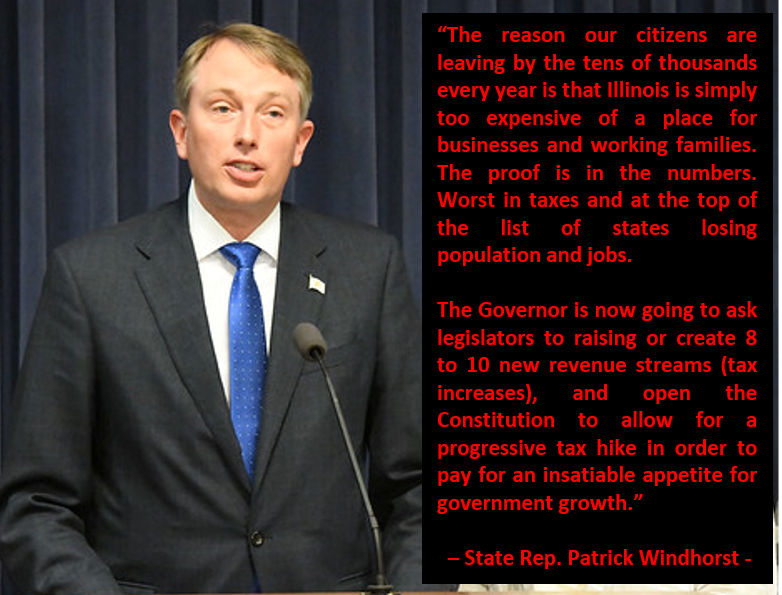 In this week’s edition of the Windhorst Weekly, I hope to provide you with a clear picture of the vast divide that exists between the vastly different philosophies toward taxation, regulation, and government expansion that exist between the Chicago Democrats and the people that I represent in Southern Illinois.

On Wednesday morning, I held a press conference in the Capitol press room to urge Democrats to reject SJRCA 1 and the other bills in the legislative package that makes up the job-killing, graduated tax hike plan. You can watch my part of the press conference by clicking the YouTube video link below:

Here’s a transcript of my remarks:

In my first ever Capitol press conference, I had the dubious honor of reporting that the State of Illinois ranked 51st among the 50 states and Washington D.C. according to the most recent Wallet Hub study. Even adjusted for cost of living, Illinois ranked 49th of the 51 governments on the list.

Unfortunately I’m back to warn taxpayers that the Democrats are coming for your wallets yet again, and have quite a wide menu of taxes they are looking to raise.

With Illinois’ taxes the highest in the nation, and with likely 8 to 10 new tax hikes to be voted on over these next 5 short weeks before adjournment.

I’m here to say that I do not trust Governor Pritzker and the Chicago Democrats with a blank check to raise taxes, skip out on our obligations, and pursue unlimited government expansion.

Democrats raised taxes twice already just this decade, in 2011 and 2017, yet our debt is exploding, our citizens are taxed to the limit, and the Governor is here with a very hefty menu of new tax hikes and spending plans.

We have to take a serious look at the probability that businesses and people will continue to leave the state if these plans move forward. That will mean taking the jobs and economic investment with them to states with more favorable business environments.

It gives me no pleasure to have to repeat a question I asked the media and the people of Illinois in this room at this very podium during my first press conference as State Representative 2 months ago:

When are the Chicago Democrats, that control every lever, every single shred of power in this State government….When are they EVER going take responsible action to pay off our crushing debt, to encourage economic growth, and to remove the jackboot heel of tax increase from the necks of the middle class?

When will the Democrats that vote for those Chicago Democrat leaders ever stand up and say, “Hey, my constituents are Illinoisans too…and THEY are MAXED out,”?

Very simply, ladies and gentlemen, the reason our citizens are leaving by the tens of thousands every year is that Illinois is simply too expensive of a place for businesses and working families. The proof is in the numbers. Worst in taxes and at the top of the list of states losing population and jobs.

The Governor is now going to ask legislators to raising or create 8 to 10 new revenue streams (tax increases), and open the Constitution to allow for a progressive tax hike in order to pay for an insatiable appetite for government growth.

Just a few hours after I delivered my remarks, Senate Democrats ignored the will of working families and advanced 4 pieces of legislation over to the House that establish the Governor’s desired graduated income tax plan, new tax rates, and a measure to place a proposed amendment to the Constitution on the 2020 ballot.

Below is a helpful breakdown of the entire package:

On Wednesday, May 1st, Illinois Senate Democrats passed a graduated tax package out of the Senate that would increase taxes by more than $3.5 billion per year.

“The Senate’s votes today are a slap in the face to thousands of Illinois families and businesses – just another step towards handing a blank check over to the Democrats and their reckless spending habits.”

The Senate tax package includes four pieces of legislation: a constitutional amendment to remove the current flat tax requirement; a revised graduated income tax plan; a repeal of the Illinois estate tax; and a conditional property tax freeze for school districts. The package is written in such a way that requires all of the bills to pass or the estate tax repeal and property tax freeze will not take effect.

It was an honor to stand beside police officers and elected officials from across Illinois earlier this week as we paid tribute to our state’s fallen heroes. We will never forget their sacrifice and are grateful for their bravery and service.

Next week will be a busy one in the House The deadline for the House to pass Senate Bills is on Friday! The Session is quickly approaching its end, and with so much left to do, the action will happen at a blinding pace. Please stay tuned to this space each week for news from Springfield and more. My office in Harrisburg is located at 2 N. Vine, Suite 5A and is open -from 8:30 to 4:30 Monday through Friday. You can reach us at 618-294-8703.