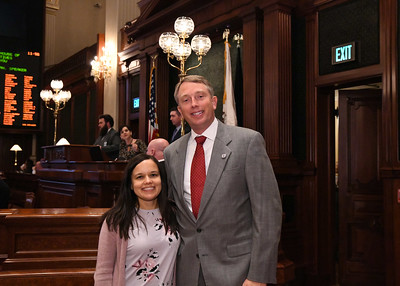 Lawmakers returned to Springfield for the first time since June 2nd for three days of Veto Session this week. First things first, I want to thank my wife Holly for celebrating her birthday week by spending time with me in Springfield. Here we are on the House floor on Monday!

Despite this being the 2019 Veto Session, no veto override measures were taken up in the House during the three-day Session.

As I indicated in newsletters leading up to the start of the first week of the fall Session, all House floor and Committee time was used to advance new pieces of legislation. I’ve got a recap of those items below.

News of the arrest started a chain of events that included House Republicans demanding Arroyo’s resignation and signing on to invoke House Rule 91 to create a Special Investigating Committee to investigate possible criminal conduct by Rep. Arroyo. By the end of the three-day Session, Speaker Madigan and Republican Leader Jim Durkin had assigned members to the Committee. The Committee’s first meeting was scheduled for today, but, Rep. Arroyo has since submitted his resignation effective at the close of the business day.

This week I signed on to co-sponsor two bills aimed at cleaning up our state’s ethics laws. HJR 87 would create a State Ethics Task Force. The task force would study the state’s current ethics laws, study best practices used in other states and make recommendations for changes. I am now also a co-sponsor of legislation that would ban sitting state lawmakers from registering as a lobbyist for a municipality. Several Illinois legislators are also registered lobbyists for the city of Chicago. You cannot make some of this stuff up.

Earlier this week, Senate President John Cullerton introduced Amendment 1 to SB 616, legislation that would consolidate the assets of 649 pension funds that provide retirement income and pension benefits for retired police and firefighters in Illinois.

The legislation to combine the assets of the ‘downstate’ police and fire pension funds resulted from an October 10th report issued by Governor Pritzker’s pension consolidation feasibility task force. The report recommended that the 649 police and firefighter pension funds to potentially achieve higher investment returns.

The Pritzker administration says the goal of combining these assets would be saving money on administrative costs and the potential to earn higher investment returns for the system overall. There is currently a combined $11 billion shortfall in the ‘downstate’ police and fire pension funds. The Governor’s report estimates investment returns of $800 million to $2.5 billion per year if the changes are implemented.

For now, Illinois police advocacy groups have expressed opposition to the plan. One concern is that the legislation will not properly protect current funds, and point out that some funds would be “bailed out” because they were either managed irresponsibly or experienced reductions in value due to drastic stock market losses in 2008.

President Cullerton indicated during a press availability on Tuesday that he desires to reach an agreement with the police groups that oppose the plan. That is good news for first-responders in Southern Illinois that have reached out to me to express serious concerns about the proposal.

I understand that many would be skeptical of a takeover of pension assets, or a combination of them into ‘one big fund’. That is not necessarily what the result of this particular bill would be…but, the Democrats that control all levels of power in Springfield have authorized pension payments being skipped in the past.

The mismanagement of pension decisions by Speaker Madigan and President Cullerton over the decades they have been in Springfield has left Illlinois’ five pension systems around $200 billion short of what would be considered properly funded.

Pension debt is a major financial complication for Illinois. The shortfall causes the state’s credit rating to be affected in a negative way which increases our costs of borrowing. The higher rates cause Illinois taxpayers to have to make up shortfalls in other areas.

Pension consolidation is an idea that has been talked about for 100 years in Illinois. The Governor has indicated that he wants something passed during the fall Veto Session. It is not clear at this time if he will get what he wants. I will keep you up to date on this issue in the coming days and weeks. For now, I stand opposed to this plan because I simply don’t trust Democrats to keep their word and leave the money alone.

A movement has been building recently to allow student-athletes to profit from the use of their image or likeness. State Rep. Chris Welch introduced HB 3904 and passed the bill through the House on Wednesday. I voted in support of this legislation.

The NCAA and Universities make billions of dollars by distributing student-athletes’ likenesses via television and streaming broadcasts and through ticket and apparel sales.

The student-athletes put in a tremendous amount of time and work to pack stadiums that employ folks all over the country. I believe they should be compensated fairly for the role they play in bringing in revenue and building the university’s brand.

Most student-athletes do not become professional, high-paid athletes, yet they subject themselves to the possibility of catastrophic, life-altering injuries while competing. I believe they should have the opportunity to make some money while they are healthy and able to compete.

Student-athletes often find themselves in a position where they have very little money to buy personal items, groceries, dinners out, and transportation. Taking this action will send the message that we appreciate the sacrifices student-athletes make on behalf of our Universities. Shortly after the bill passed the House, the NCAA announced this week that they will be taking steps to address revenue-sharing and endorsement opportunities for
student-athletes.