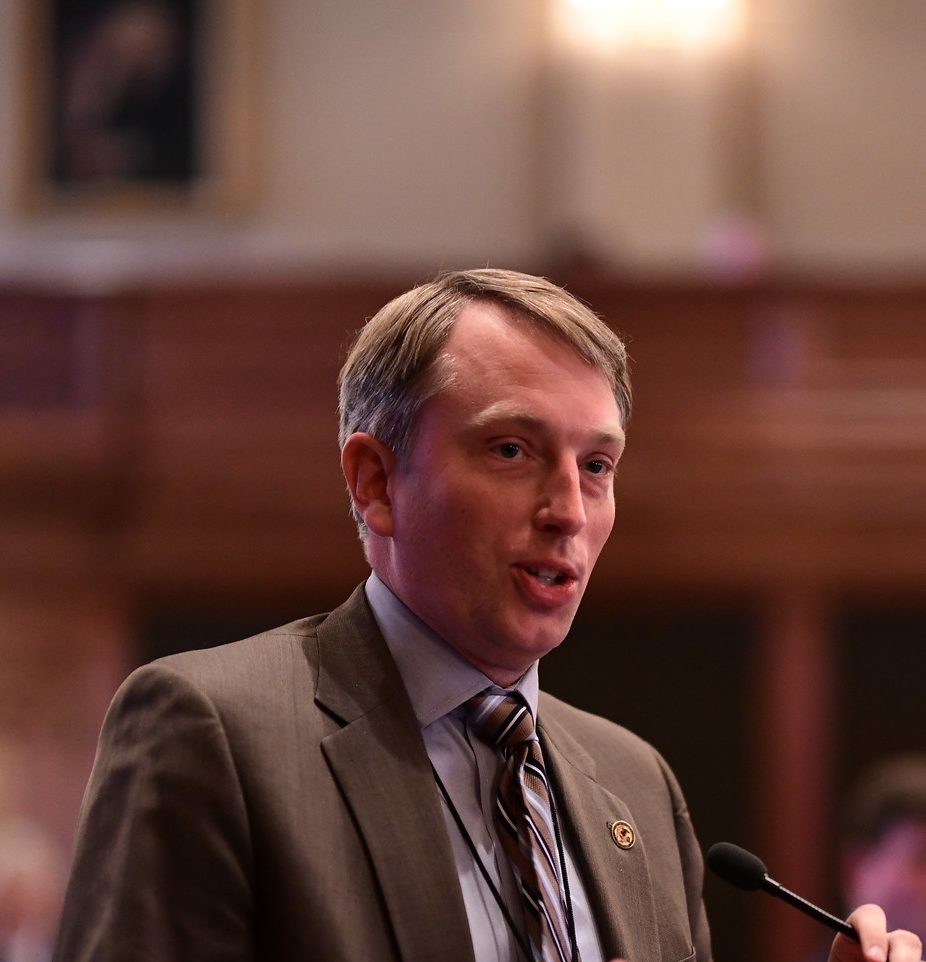 This week’s Windhorst Weekly recaps a busy last week of news. Despite the legislature not returning to action until Veto Session, there are still many issues to keep up with that impact our lives every day.

This week’s topics include: Ethics reform and the upcoming meeting of the Special Investigating Committee on Tuesday, Sept. 29, jobs, transportation, the FY 21 state budget, and information from the Secretary of State’s office on extending driver’s license expirations. There’s mucn more below, and as always, thank you for reading!

Leading Voices: Have all Voted Who Wish Podcast

Last week I participated in my first ever podcast. The House Republicans host a podcast titled, “Have all Voted who Wish?” This week’s topic was criminal justice reform.

My experience as a prosecutor and my participation as a member of the Illinois House Judiciary Criminal Law Committee has provided me with a wealth of experience to draw on for this topic. Some criminal justice reforms, I believe, are positive. For others, we must be very careful to avoid creating unintended consequences that can have serious negative impacts on society. Take a listen and let me know what you think!

The Chicago electric utility holding company is one of the focal points of the Committee’s investigation into allegations that House Speaker Michael J. Madigan allegedly took part in conduct worthy of potential disciplinary action. Commonwealth Edison has already agreed to a Deferred Prosecution Agreement with the Office of the U.S. Attorney that includes the payment of $200 million. The announcement of the payment in July 2020 coincided with reports that ComEd was cooperating with federal prosecutors.  Now, one or more ComEd executives will be called as witnesses by the Committee.

House Republican Leader Jim Durkin, who filed the petition calling for creation of the Special Investigating Committee (SIC), sent a letter Thursday to Chairman Chris Welch, stating that Durkin and/or his counsel will be questioning the ComEd executives at the next hearing of the SIC, scheduled for Tuesday, September 29.

On July 17, 2020, the United States Attorney for the Northern District of Illinois released a Deferred Prosecution Agreement (“DPA”) with Commonwealth Edison (“ComEd”) in Case Number 1:20-cr-00368, where ComEd acknowledges and agrees that ComEd engaged in a bribery scheme with Public Official A and individuals closely associated with Public Official A from 2011-2019. In the DPA, Public Official A is referred to as the Speaker of the House of Representatives. Michael J. Madigan was the Speaker of the House from 2011-2019 and is still the Speaker today. ComEd admits to corruptly providing, offering and agreeing to give things of value, namely jobs, vendor subcontracts, and monetary payments associated with those jobs and subcontracts for the benefit of Madigan and his associates, with the intent to influence and reward Madigan. ComEd admits to bribing Madigan and his associates with jobs, contracts and payments in an effort to influence Madigan to assist ComEd with respect to legislation concerning ComEd and its businesses.

A former ComEd corporate vice president, Fidel Marquez, was indicted in early September and charged with alleged bribery. Prosecutors said at the time that the allegation was connected to an overall pattern of alleged influence peddling between ComEd and Public Official A.

The Office of the U.S. Attorney has authorized the House Special Investigating Committee to call witnesses. Based on the progress of the ongoing federal investigation, there may be limits on what witnesses can discuss with the SIC. The terms of ComEd’s deferred prosecution agreement could be part of overall progress towards a possible future outcome. Observers point to the probability that ComEd is currently cooperating with law enforcement in a manner that is satisfactory to prosecutors. In that case, the $200 million payment announced in summer 2020 could be translated into a criminal fine, and additional individuals could be charged and prosecuted with offenses that could include federal felonies.

In a report published this week, S&P looked at the State of Illinois’ structural budget deficit, which has been worsened by spending pressures and tax yields created by the COVID-19 pandemic.  More than $130 billion in unmet pension obligations and more than $7.6 billion in unpaid bills are among the fiscal burdens that have built up over many years in Springfield.   Comparatively weak demographic trends, with an aging population and significant outmigration of young adults to more job-friendly states, were also tagged by S&P.

As a response to the coronavirus pandemic, the Democrat-controlled General Assembly authorized Gov. Pritzker’s administration to borrow billions of dollars from the U.S. Federal Reserve’s Municipal Liquidity Facility, an emergency lending window created by Congress in spring 2020 as a provider of short-term cash to public-sector borrowers who cannot get credit from the private sector.   These Municipal Liquidity Facility loans are supposed to be short-term loans that will be paid back within three years.

However, S&P’s analysts registered doubts as to whether the State of Illinois will be able to repay the Facility without further assistance.  The debt-rating agency reached somber conclusions as to Illinois’ ability to solve its budget problems on its own.  The accumulation of Illinois-unfriendly global economic trends, catastrophic news events, and poor Springfield fiscal policies carried out for many years appears to indicate that either Illinois must ask for, and get, significant additional federal aid over a multi-year period, or its debt rating will have to be further reduced in line with its current fiscal status and standing.

The milestone was reached on Saturday, September 19.  A growing network of test sites, including some test sites that can perform rapid-response tests, is making COVID-19 exposure information available to more and more Illinoisans.  With the help of testing technology and rapid-response protocols developed at the University of Illinois and by other health professionals, Illinois has become a nationwide leader in coronavirus testing infrastructure.  The number of COVID-19 tests performed in Illinois had further increased to 5.15 million by Monday, September 21.

The wide availability of Illinois COVID-19 test access and information is, at the same time, further reducing the usefulness of a key mitigation number, the “positivity rate.”  The positivity rate used the percentage of positive cases, as a percentage of total tests, as an inferential gauge to estimate the contagiousness and spread rate of the COVID-19 coronavirus throughout Illinois, especially in specific geographic regions.  However, the usefulness of the “positivity rate” as a standard gauge requires the population that is taking COVID-19 tests to remain stable over time.  If the characteristics of the tested group change, for reasons including (but not limited to) the increased supply of testing capabilities, changes in the positivity rate could generate misleading (or even false) signals on how fast this virus is moving from person to person in Illinois.

Other regions within Illinois continue to be challenged by the virus.  The Metro-East’s Region 4 continues to post high positivity rates. Sections of Illinois that border other states, such as Region 1 (Wisconsin) and Region 4 (Missouri) are especially challenged by this virus and its controls, as not all U.S. states have the same COVID-19 rules at this time.

It is all too risky to play the odds with respiratory illnesses that can compound on top of each other.  Lung lesions and inflammations can make it easier for other bacteria and viruses to get into the lungs.  The flu shares many symptoms with COVID-19.  For these and other reasons, doctors and health care providers urge Illinoisans to get a 2020-21 flu shot as early as possible.  Many pharmacies and community centers offer flu shots at free or reduced rates.

The Illinois Department of Public Health (IDPH) recommends that everyone aged 6 months and up get a flu shot prior to each flu season, which typically starts in October.

In numbers released this week, the Illinois Department of Employment Security (IDES) described August 2020 unemployment rates in metro areas throughout Illinois.  The numbers revealed severe continuing layoff activity in greater Chicago, with joblessness estimated at 12.6% in August.  For unemployment-counting purposes, metro Chicago includes all of Cook and DuPage Counties, but does not include Kane County (9.5% unemployment in August) or Lake County (8.3%).

As with Kane County and Lake County, many other Illinois metro areas are also counted separately, and in the final full month of summer 2020 they also displayed lower unemployment numbers than the immediate Chicago area.  Other major Illinois areas included Bloomington-Normal (7.2% in August), Champaign-Urbana (7.4%), the East St. Louis area near St. Louis (8.6%), Peoria (9.6%), and Rockford (11.3%).

The Illinois statewide unemployment figure was 10.9% for August 2020.  This was dramatically worse than the comparable number for August 2019, which in which Illinois had enjoyed “full employment” of 4.0% as a mark of recovery from the 2008-10 Great Recession.

Illinois motorists carry drivers’ licenses issued by the Office of the Secretary of State, but the COVID-19 pandemic has disrupted the ability of the offices that issue these licenses to scrutinize Illinois residents’ papers and put applicants through license tests.  Most Driver Services Division offices remain open, but long waiting times to renew licenses are common.

Due to these challenges, Secretary of State Jesse White had announced a series of one-time-only extensions of the expiration dates of drivers’ licenses.  This week, White announced a further extension.  All such cards that are expiring will continue to temporarily be good for driving and identification purposes.  The expiration date printed on the card has been extended until February 1, 2021.  Holders of old Illinois drivers’ licenses that are currently expired, or are set to expire, will not have to renew their cards until the approach of that date.

The extension also applies to non-driver personal ID cards, which are also issued by the Driver Services division of the Secretary of State’s office in Illinois.  Non-driver personal ID cards are used to identify a cardholder for security purposes; REAL-ID-compliant drivers’ licenses and ID cards can be used to enter a federal building or board a commercial U.S. airline flight.

Illinois drivers’ licenses had previously been extended until November 1, 2020.  Nothing prevents Illinois drivers and cardholders from coming in to renew their cards sooner, and the Secretary of State’s office continues to urge Illinoisans to do so if they can.

WEEK IN REVIEW – Get the Week in Review emailed directly to your inbox!  Sign up today to get a first-hand look at the continuing legislative and fiscal challenges facing policymakers in Springfield.