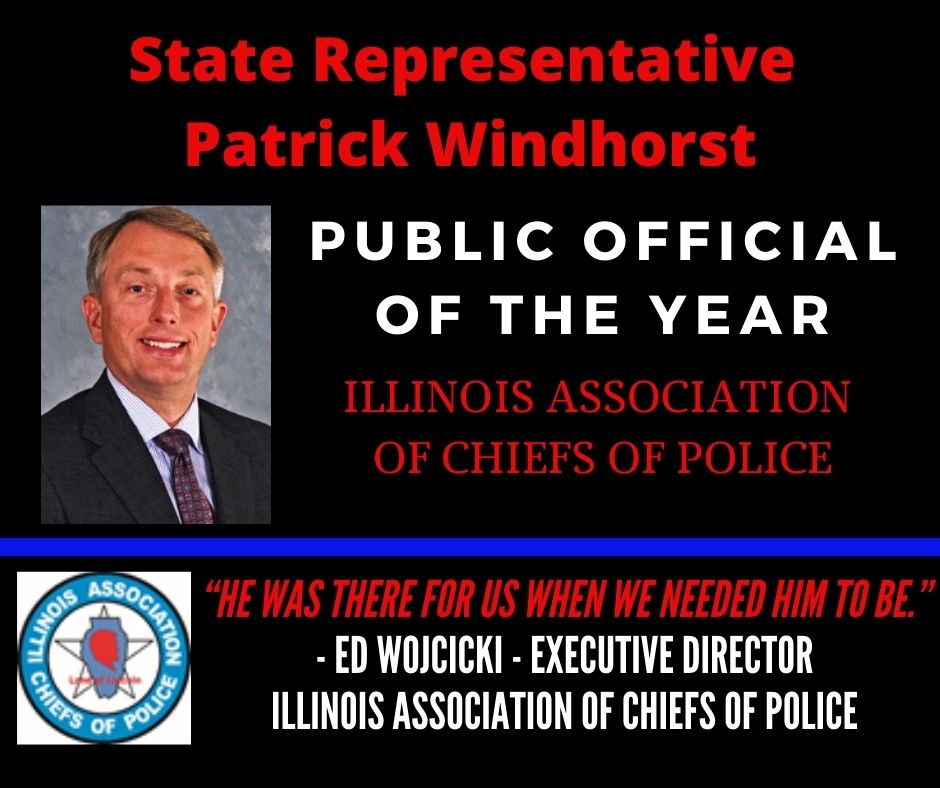 METROPOLIS – The Illinois Association of Chiefs of Police announced this week that State Representative Patrick Windhorst (R-Metropolis) has been named one of two “Public Officials of the Year.”  Windhorst was recognized by the association for his efforts to promote and protect public safety and for his strong support of law enforcement during his first term as 118th District State Representative.

“As a member of the House Judiciary Criminal Law Committee, I have worked to enact laws that improve public safety and support our law enforcement officials at all levels,” Windhorst said. “I am grateful to the Illinois Association of Chiefs of Police for bestowing this honor on me. I will continue to stand for public policies that improve safety in our communities and provide the resources and support to the brave men and women of the law enforcement community as a member of the Illinois House.”

Please read below for a copy of the official press release issued by the Illinois Association of Chiefs of Police.

SPRINGFIELD – Illinois’ attorney general and a southern Illinois state representative have been named Public Officials of the Year by the Illinois Association of Chiefs of Police. They are:

The selection is made by the Board of Officers, the association’s governing body.

Attorney General Raoul worked collaboratively with the Illinois Chiefs and other law enforcement leaders over a period of months beginning last summer to strengthen Illinois’ process of decertifying police officers. “He called the Illinois Chiefs at the beginning to listen to our conceptual ideas and specific language,” said Chief James R. Black, the president of the Illinois Association of Chiefs of Police.

“One of the first steps I took when developing a proposal to improve the police certification and decertification process was to form a working group comprised of police chiefs and other law enforcement officials because their feedback was an important part of strengthening the process. I would like to thank Representative Windhorst for his participation and input throughout the process,” Attorney General Raoul said. “I appreciate the input of the Illinois Chiefs of Police as we worked to ensure that our legislation provided for due process and would be workable for departments throughout Illinois. I look forward to our continued collaboration as we protect residents in communities around the state.”

Raoul then facilitated numerous Zoom meetings with the Illinois Chiefs and other law enforcement leaders to draft a bill acceptable to all. “He immediately shared his draft language with us late last year, and we proceeded to communicate openly, going back and forth, and we finally had a bill that we supported,” Black said “This process worked very well. It was a great way to develop legislation that benefits Illinois.”

That language supported by the Illinois Chiefs became part of the omnibus criminal justice reform law that Governor Pritzker signed on February 22, 2021. “It’s complicated because we opposed the final omnibus bill, but we were always deeply grateful to General Raoul for his commitment to finishing a good process with us,” said Ed Wojcicki, ILACP Executive Director.

Windhorst has the unique distinction of being recognized by the Illinois Chiefs for his outstanding work during his first term as a state representative. He had served as Massac County state’s attorney before entering the Illinois General Assembly in 2019. He quickly distinguished himself as a supporter of law enforcement.

He serves on the House Judiciary-Criminal Committee and the new Restorative Justice Committee, both of which are very important to the Illinois Chiefs.

“On that final day of the lame-duck session in January when the omnibus bill passed, Windhorst stood up on the House floor during the final debate and asked the kinds of questions that should have been asked about bad legislation, and we were pleased to see that he spoke up,” Wojcicki said. “He was there for us when we needed him to be.”

Raoul and Windhorst will be recognized publicly by the Illinois Association of Chiefs of Police, most likely in Springfield sometime when the COVID protocols are loosened.

A list of all past ILACP Public Official of the Year honorees can be found here.