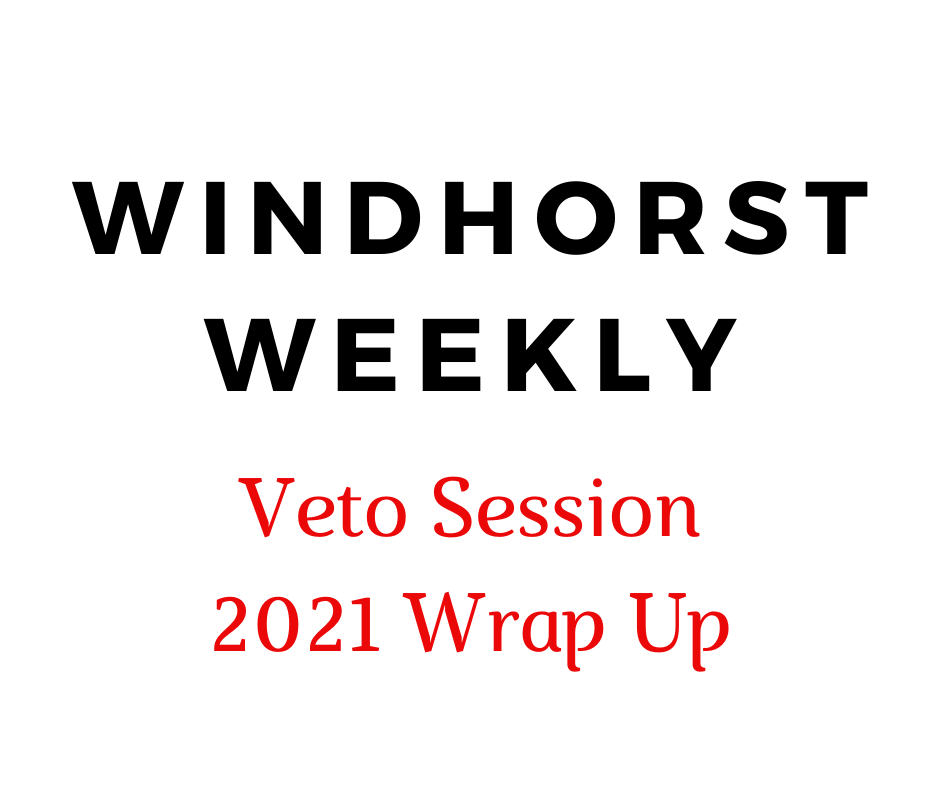 The 2021 Veto Session will appear in Illinois’ history books as more of a regular session than a veto session following the close of the 102nd General Assembly’s two-week stint in Springfield at the end of October.

First, the legislature usually uses the Veto Session to consider vetoes of bills from the spring legislative session. The House and Senate Democratic supermajorities brought us back for the last two weeks of October not to consider veto override motions, but to pass bills aimed at moving the state even further down the path of leftist progressive public policy.

Most recently, Governor Pritzker signed legislation that amends Illinois’ Health Care Right of Conscience Act that protected the right of individuals to cite sincerely held beliefs to receive an exemption from being forced to receive medical services, vaccines, or tests that violate a person’s conscience. The law has been changed to prevent employees from suing their employer if the employee is fired or suspended after citing a firmly held religious or other personal belief against being tested for or receiving the COVID-19 vaccine.

Senate Bill 1169 provides COVID-19 exception to the State’s Right of Conscience Act which prevents discrimination based on, “conscientious refusal to receive, obtain, accept, perform, assist, counsel, suggest, recommend, refer or participate in any way in any particular form of health care services contrary to his or her conscience.”

The legislation was opposed by more than 77,000 people who weighed in through the General Assembly’s witness slip process. The change received zero Republican votes in the House and Senate, with slim partisan majorities of Democrats voting to support the change.

Meanwhile, a federal judge has halted the plan by the Biden administration to levy hefty fines on businesses with more than 100 employees that fail to have 100% vaccination or provide weekly proof of negative COVID tests for unvaccinated employees.

I applaud the judicial branch for stopping an unconstitutional move by the President that would most certainly drive up unemployment, further damage the supply chain, and cost essential employees, police, firefighters, and other first responders their livelihoods. I am vaccinated. I have encouraged my constituents to talk to their doctor and make their own best personal health decision since the vaccines became available.

I have opposed COVID-19 vaccine mandates and firmly believe that our laws should protect an individual’s rights of conscience to refuse health care services. Another controversial piece of legislation that is now awaiting action by Governor Pritzker is the repeal of the final pro-life law on the books in Illinois. Democrats again ignored the voice of thousands of Illinoisans who expressed their opposition to removing the requirement that parents of minor children receive 48 hours notification before that minor has an abortion.

Illinois law does not currently require that parents consent to the procedure, but does require parental notice. The current law also provides exemptions from notifying parents in cases of medical emergency or if the minor is the victim of abuse or neglect by the parent.  The law also provides for a judicial waiver of notice to a parent.

Again, supermajority Democrats passed HB 370 through both chambers of the legislature on slim partisan majorities. No Republicans supported the change. The Governor has not signed the legislation to date but indicated his support for the change throughout the process. I maintained my 100% pro-life voting record by voting against the change. I believe our laws should be encouraging parental involvement in their children’s lives.  Instead, removing this provision makes minor children less safe, and more susceptible to human traffickers and child sexual predators.

You still have time to sign the petition on my website in opposition to the governor signing the repeal of parental notification of abortion. You can voice your opinion at ILHouseGOP.org/notification.

Another major issue tackled by the General Assembly in the final week of the 2021 Veto Session was the new United States Congressional redistricting map for Illinois. House Democrats voted to pass the fourth and final version of their gerrymandered congressional map around midnight on the final day of the Veto Session.

The House held no committee hearing on the final map, took no testimony from advocates, and gave legislators and the general public no time to review or digest the details of the new map. As a result of the 2020 U.S. Census, Illinois is required to divide the state into seventeen congressional districts, equal in population, for the U.S. House of Representatives map that will be used for elections over the next decade. Illinois currently sends eighteen members to the U.S. House, but due to our declining population from 2010 to 2020, Illinois lost one congressional district. Four incumbent Illinois Republicans were drawn into two new congressional districts across central and southern Illinois.

A new Democrat-leaning open district was drawn, ranging from the Metro East near St. Louis, through Springfield and Decatur, and over to Champaign-Urbana. Editorial boards and good government leaders across Illinois have criticized the maps and the blatantly partisan nature of the process that produced them. Multiple lawsuits are pending against Illinois’ new General Assembly maps with status hearings taking place in November and a final decision on the maps’ constitutionality likely to come in mid-December.

You can file witness slips to support or oppose any piece of legislation that is pending committee action at my.ilga.gov. I encourage you to exercise your right to express your opinion in the upcoming session that begins in January 2022. My office in Harrisburg can be reached at 618-294-8703 or you can reach me by email at Windhorst@ILHouseGOP.org.

I am always interested in hearing your opinions on these and other major issues facing the State of Illinois. Thank you for the opportunity to serve you in Springfield. May God bless you and your family this Thanksgiving season and may He continue to bless the United States of America.