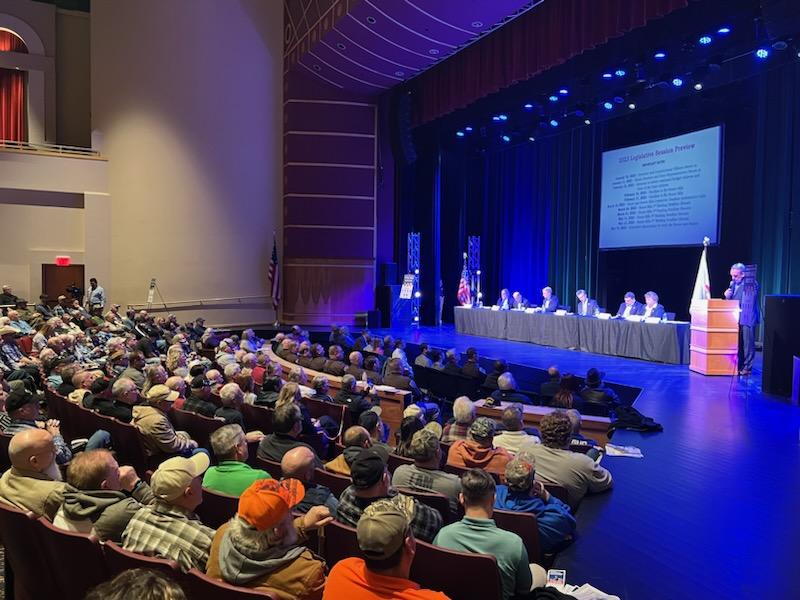 A main topic of conversation for the event was the recently passed and signed firearms ban (HB 5471).

State Rep. Patrick Windhorst says the event was designed to inform and educate the public on recently passed legislation and to provide a preview of what’s to come in the current 103rd General Assembly, which began on Wednesday, January 11, 2023.

“Our legislative town hall meeting was a joint effort between House and Senate members from Southern Illinois with the goal of educating the public on the many different pieces of legislation that passed in the 2023 Lame Duck Session, including, but not limited to the recently signed firearms ban,” Windhorst said. “We wanted our constituents to know that we stand with them in protection of our 2nd Amendment Rights, and to have as much information as possible on the new law.”

State Rep. Dave Severin says the hundreds of Southern Illinoisans in attendance had a chance to meet face to face with their legislator, to learn about the new district boundaries that took effect as of January 11th, and asked questions on important topics facing citizens and the General Assembly.

“The town hall meeting we held was the kind of event I believe the people deserve. We are working to be transparent and open with the citizens that we serve in Springfield,” Severin said. “I am very proud to say we had hundreds of people in attendance and the people we represent were provided detailed information on how their rights have been infringed by this new firearms ban. We demonstrated to our citizens that we stand with them in defense of our Constitutional rights.”

State Rep. Paul Jacobs offered his thoughts on the town hall meeting, saying he believes the event gave concerned citizens access to their legislators, and a chance to voice their frustrations with an out-of-touch Governor and supermajority Democrats in the legislature.

“I think the people of Southern Illinois get it. We stand with them. The Republicans that serve them in Springfield stand for their rights, and against the abuse of power that’s been shoved on all of us in Southern Illinois by Governor Pritzker and leftist progressives that are stifling our freedoms,” Jacobs said. “I’m working to get information to my constituents in my new district as to how I plan to represent them. This was a perfect opportunity to do just that.”

State Rep. David Friess says he was thrilled to meet with fellow citizens concerned for their Second Amendment Rights and to provide an explanation on important issues happening in Springfield.

“It is a rare thing to get this many legislators in front of a crowd this size, but the times we are living in demand transparency, accountability, and the opportunity for our citizens to get to ask questions and learn from us what’s really going on,” Friess said. “The supermajority Democrats sure aren’t focused on being transparent as they pass sweeping bills in the middle of the night time and time again. What we did with this town hall meeting is give the opportunity for clarity on major issues that impact the lives of our citizens. They deserve nothing less.”

A presentation explaining details of the gun control legislation, abortion expansion, paid leave, and wind and solar energy was provided to the audience of more than 900 people at the Marion Cultural and Civic Center. The presentation can be found by clicking the picture or the link below.