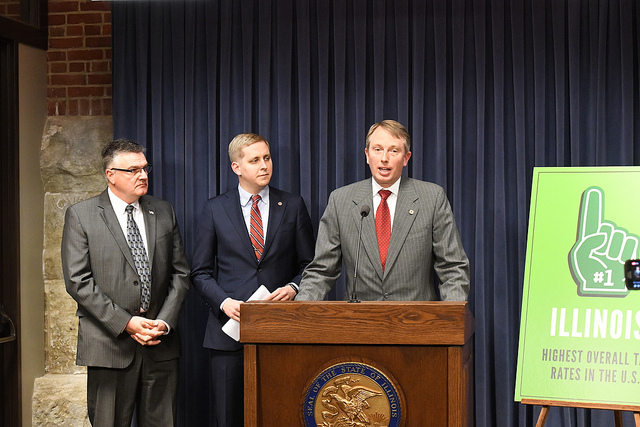 This was one of THE busiest weeks that I’ve experienced so far as your State Representative. This week’s edition of the Windhorst Weekly details a press conference that I led at the Capitol on Tuesday. In Springfield, there is much discussion coming from the Democrats as to how they plan to raise your taxes even higher. I used my time to highlight a recent study by WalletHub.com that ranks Illinois as having the highest state and local taxes in the country.

Also, pro-life advocates descended on Springfield by the thousands on Wednesday. Pictures, videos, and links to coverage of all the action you need to know about your government…it’s all part of this week’s Windhorst Weekly!

Illinois Ranks Dead Last in Taxpayer Friendliness
Did you know that Illinois is currently ranked 51st of all the US States and Washington D.C. when it comes to the amount of State and Local taxes you pay. I held a press conference with my colleague Rep. Tom Demmer (R-Dixon) to detail an alarming recent study by Wallet Hub that named Illinois 51st in taxpayer friendliness.

PRESS RELEASE: Windhorst: Illinoisans Pay the Highest Tax Rates in the United States
Springfield…. In his first State Capitol press conference, State Rep. Patrick Windhorst (R – Metropolis) provided a report on the status of the tax burden facing the citizens of Illinois. Windhorst says Illinois ranks 51st among the 50 states and Washington D.C. when considering the overall burden of state and local taxes, according to a recent comprehensive report by Wallet Hub.

“Last week’s WalletHub.com study found Illinois ranks dead last when it comes to the overall state and local tax burden,” Windhorst said. “My district borders Missouri and Kentucky, two states that have lower overall tax burdens. With Governor Pritzker proposing several new tax increases, I believe he is creating incentives for people and businesses to continue to leave the state for greener pastures.”

The Wallet Hub study found that Illinoisans’ median tax rate is 14.9% where the national average is 10.76%. Windhorst says one of his motivations for running for office was to stop the endless expansion of government taxation and spending. The study showed Illinois ranked 51st in overall effective state and local tax rates, 39th in income tax, and 50th in real estate tax. When Illinois’ cost of living adjustment is taken into consideration, it still ranked 49th in overall taxpayer friendliness.

“One of the reasons I ran for this office is because I’ve seen my friends, family members, neighbors, local businesses, and my constituents leave Illinois for cheaper living and less regulations,” Windhorst said. “The reason people are leaving is because it is too expensive to live here and do business here. When it comes to State and local taxes, our citizens are maxed out.”

Windhorst says he and his fellow House Republican colleagues are working on solutions to bring construction jobs to Illinois, pointing to his sponsorship of the Blue Collar Jobs Act and a resolution that expresses opposition to Governor Pritzker’s proposed progressive income tax increase.

“When are the Democrats, who control every level of power in this State, ever going to take one action that makes it easier to do business in Illinois and to grow jobs here, or to lower taxes?” Windhorst asked. “We have to make this a better place to do business and a better place to own property. A better tax environment leads to businesses moving here and hiring people. More people paying taxes means a lessening burden on everyone else. We need more taxpayers, not more tax increases.”

Right to Life Rally Crowd Swells to 4,000, Temporarily Closes Capitol
The Illinois Federation for Right to life, and pro-life advocates rallied on Springfield on Wednesday, March 20 for pro-life advocacy day. Thousands of concerned citizens descended on the Capitol for a massive rally estimated at 4,000 people. The crowd was so big that Capitol security temporarily closed the Capitol building to access for the many more hundreds of people waiting outside.

It was truly an impressive showing on behalf of our innocent, unborn that continue to be under assault by legislators year after year in Illinois.  I myself was proud to stand with State Rep. Terri Bryant and Rep. Avery Bourne as they expressed our collective opposition to the disturbing provisions contained in the so-called Reproductive Health Act (HB 2495/SB 1942).

You can watch the Republican pro-life press conference by clicking here:

Op-Ed – Windhorst: Say No to Legalized Recreational Marijuana
I submitted an opinion editorial last week to The Southern Illinoisan expressing my opposition to the legalization of recreational marijuana use for adults over 21. I believe a grave threat exists when Big Tobacco (Altria, formerly Phillip Morris) money starts flowing in to Illinois to try to buy influence and to ultimately create Big Marijuana. I am concerned about our children, addiction, social services, and public safety…all issues that will no doubt arise if Illinois legalizes recreational cannabis. Please take a few minutes to visit the link below to read the entire article.

Stay Connected!
There’s still much left to do in Springfield with only about 2 months left to go before the scheduled adjournment date of May 31. If you’re counting at home…here are the issues I believe are still left to resolve: 1. The Governor’s proposed constitutional Amendment to institute a progressive income tax. 2. Dealing with the Governor’s proposals to raise taxes on plastic bags, insurance plans, online better, e-cigarettes, and cigarettes. 3. Legislation to legalize/not legalize cannabis for adult recreational use. 4. A capital infrastructure plan to rebuild crumbling roads, bridges, schools, and water treatment facilities across the State. 5. Oh yeah, a balanced budget that spends more than 36.5 billion dollars.

As you can tell, you’ll have plenty more reasons to stay tuned in and engaged with the goings-on at your State Capitol. For more in depth analysis of all the news in Illinois government, you can read this week’s House GOP Week in Review by visiting this link.