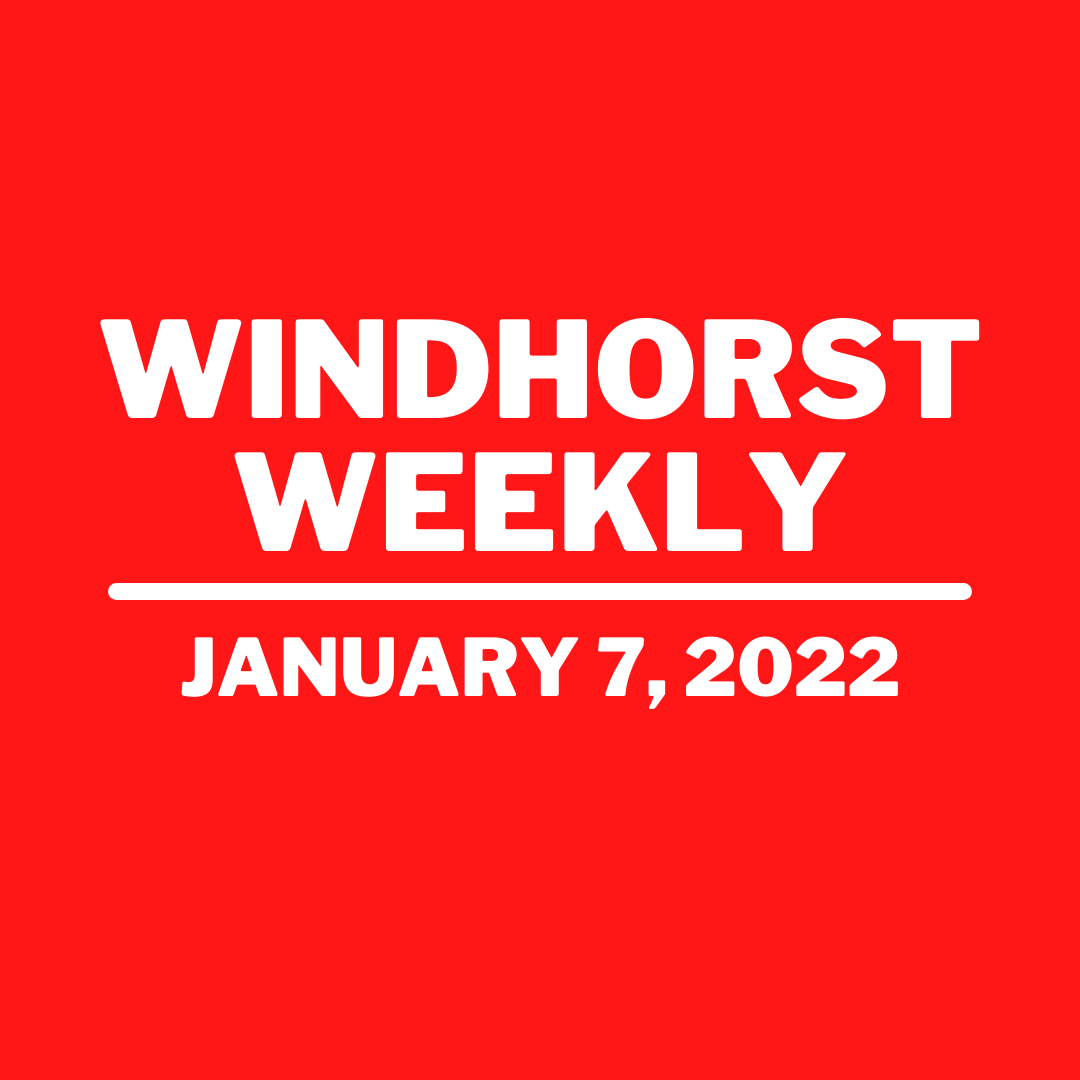 The past week has been a busy one, as the New Year brings with it the new legislative spring session. I want to take a moment first to wish you a healthy, and Happy New Year! Lawmakers returned to Springfield on Wednesday for a marathon one-day Session that started about 5 hours late and ended well after 10 p.m. This is no way to run a railroad, hiding action on major legislative issues by delaying action until most people are not able to pay attention. We adjourned on Wednesday night with no clear direction on when we will return. The people of Illinois deserve better!

My focus for this legislative Session will be the full repeal of the anti-police, pro-crime reforms that Democrats passed last year, holding the line on spending and taxes, and stopping the further expansion of government intervention into our every day lives. Thank you for your interest in the Windhorst Weekly. I will use this space throughout 2022 to keep you up to date on all the relevant news from your State Capitol and beyond!

SPRINGFIELD – 118th District State Representative Patrick Windhorst (R-Metropolis) led a Capitol press conference on Wednesday to highlight HR 598, a Resolution Windhorst is sponsoring that calls for the full repeal of the so-called ‘Safe-T Act’ containing a multitude of criminal justice reforms. Windhorst says the State of Illinois is less safe after the sweeping legislation passed in January 2021.

“As a member of the Illinois House Judiciary Criminal Law Committee and as a member of the Illinois House in the 101st General Assembly, I voted against what is known as the ‘Safe-T Act’, a package of criminal justice reforms that I believe make our communities much less safe and hampers the ability of our police officers to do their jobs effectively,” Windhorst said. “Today I filed HR 598, a Resolution that calls for the full repeal of these reforms and a restoration of an attitude fixed on restoring law and order and supporting our law enforcement officers.”

HR 598 describes in great detail the legislative calendar of events leading up to the eventual passage of the Safe-T Act and calls for a full repeal of the law. Rep. Windhorst has also requested legislation that would effectively return law enforcement codes back to what they were before Governor Pritzker signed the Safe-T Act in Feb. 2021.  “Let’s get back to being a pro-police, pro-law enforcement, public-safety-first state,” Windhorst said. “This is something we can achieve by working with our fellow legislators that are seeing rising crime rates in their own communities and by listening to our police officers, police and sheriff’s associations, prosecutors, and community leaders in the coming Session.”

Watch the full video of the press conference here:

Wednesday’s session saw yet another egregious abuse of the redistricting process. HB 3138 is legislation that creates new judicial sub circuits throughout the State of Illinois. This is not an easy concept to explain or even to understand. At a time when crime is out of control, Democrats passed a bill to ensure more Democrat political appointees ascend to the bench instead of passing legislation that would address spiraling crime in our communities.

This is yet another example of a political power grab in the redistricting process perpetrated by Democrats. With little public notice, and a zoom committee hearing early in the day that saw no witnesses testify, the late-night passage of this legislation that creates new judicial sub-circuits is an affront to transparency and good government. Democrats passed legislation to pack the courts while most Illinoisans were in bed. Bad government at its absolute worst!

There are more than 300 new laws that took effect on January 1, 2022. These changes range from the deregulation of lemonade stands to expanded cancer screening coverage and more. You can learn all about the various changes by clicking here: https://www.thecaucusblog.com/2021/12/new-laws-effective-in-new-year.html

My office in Harrisburg can be reached at 618-294-8703 or you can reach me by email at Windhorst@ILHouseGOP.org. I am always interested in hearing your opinions on these and other major issues facing the State of Illinois. Thank you for the opportunity to serve you in Springfield.