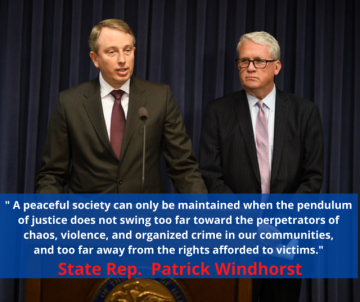 Springfield, IL…In an effort to protect victims of violent crime and their families, Illinois House Republican Leader Jim Durkin (R-Western Springs) and State Representative Patrick Windhorst (R-Metropolis) advocated Wednesday for legislation to overhaul Illinois’ Prisoner Review Board (PRB) and repeal the SAFE-T Act, ensuring that the interests of victims of violent crime, rather than criminals.

This week, Governor Pritzker’s disastrous leadership of the PRB has caused board members to resign and be rejected by the Democrat-led Senate. Durkin introduced HB 5126 in January as it became clear Governor Pritzker was prioritizing the release of cop-killers over protecting victims. Pritzker’s actions have once again broken the justice system in Illinois and torn apart the Prisoner Review Board.

“Today, I want to remind you about the voices that are all too often forgotten in our criminal justice system – the victims of crime,” said Durkin. “When perpetrators of violent crime, like cop killers, are not held accountable, there is a horrific consequence to each and every one of the victims. Governor Pritzker, through his board appointments, has abandoned these victims and their families. We need to reform the Prisoner Review Board immediately as Governor Pritzker can’t be trusted.”

According to Durkin, there are a number of recent examples of violent offenders being released by Pritzker’s PRB over the objections of victims, their families, law enforcement, and judges.

Paul Bryant has a long history of violent crimes, including numerous convictions for murder, rape, home invasion, burglary and more. Bryant was convicted of killing a 59-year-old woman whose throat he slashed during a robbery in 1976 and the murder of a 19-year-old woman who he raped, beat, strangled and set on fire in 1977. Another woman was held at knifepoint, robbed, and raped in her home.

Ray Larsen, a man convicted of murdering a child and deviant sexual behavior, made headlines last year when, just days after being released, he absconded from the state, violating the terms of his parole and becoming a fugitive.

In July of 1970, Johnny Veal murdered two Chicago police officers, Sergeant James Severin and Officer Anthony Rizzato, who had volunteered for the “walk and talk” community outreach program, which aimed to reduce crime. On July 17, Severin and Rizzato were murdered in cold blood while crossing a baseball field as part of a coordinated sniper attack planned and executed by a local gang.

Under Durkin’s proposal, victim-focused reforms would be instituted to the Prisoner Review Board. Durkin’s legislation does the following:

Windhorst, the sponsor of HB 4499, which would repeal the SAFE-T Act, says that Illinois Democrats have created a consequence-free Illinois for criminals, leaving victims of violent crime vulnerable. He argues that Illinois’ citizens deserve to live in safe communities and neighborhoods where they can live, work, play, and raise their families without living in fear of violent criminals that are back out on the street just a few hours after their last offense.

“Victims of violent crime cannot be treated as an afterthought,” said Windhorst. “A peaceful society can only be maintained when the pendulum of justice does not swing too far toward the perpetrators of chaos, violence, and organized crime in our communities and too far away from the rights afforded to victims. When we create a criminal justice system that doesn’t hold violent criminals accountable, we rob victims of the justice they deserve.”

“Our state must change. Democrats need to stop putting criminals before victims and ensure justice is served,” said Durkin. “The voices of victims and their families must be heard loud and clear.”