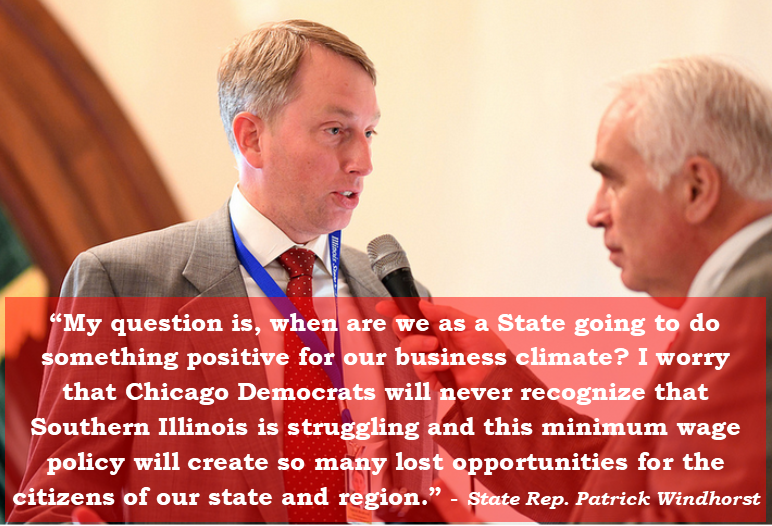 I want to thank the thousands of Southern Illinoisans that have reached out to my office in the last couple of months to express your opinion on the issue of raising the minimum wage to $15.00 per hour. Unfortunately, this week the House passed SB 1, and the Governor is expected to sign the bill in to law. My reaction to this development can be found a little bit further down into this week’s edition of Windhorst Weekly.

Along with keeping you informed on the action in Springfield, and voting NO on the massive minimum wage hike, this week I filed a very important piece of legislation.

As you may know, I am a staunch proponent for the unborn. I am unapologetically pro-life. To that end, I have been very disturbed in recent weeks to see news reports regarding the legalization of infanticide in states like New York and Virginia. In response to these ghoulish policies, I have filed legislation that will be referred to as the “Illinois Anti-Infanticide Act”.

I also was happy to meet with county treasurers from the southern Illinois region this past week prior to heading to Springfield. Thank you for reading!

Press Release: Windhorst Votes NO on Minimum Wage Hike to $15.00

Springfield….118th District State Representative Patrick Windhorst says he is disappointed, but not surprised that Democrats in Springfield have muscled through an expedited bill to raise Illinois’ minimum wage to $15 per hour.

“They have the votes, unfortunately, to do whatever they want,” Windhorst said, referring to super-majority grips held by Democrats in both Chambers of the legislature. “Despite the early rhetoric from Governor Pritzker to work across the aisle, to achieve bipartisan solutions, this week we saw that was just a lot of talk. Ramming through a $15 minimum wage without proper study is likely to have devastating, long-term effects on Southern Illinois’ economy.”

Windhorst’s district shares border territory with both Missouri and Kentucky, states that will have lower minimum wages than Illinois by the time Illinois’ six-year increase takes full affect.

“We have to be very concerned in Southern Illinois about where we are going to be able to employ our citizens,” Windhorst said. “Profit margins are the only way that small business owners survive. Almost doubling the cost of labor will most certainly have small businesses and big businesses alike looking across our borders for friendlier business climates.”

METROPOLIS…Constituents in the 118th district and across Illinois have watched in horror over the last few weeks as states like New York, Virginia, and Rhode Island have enacted or proposed legislation essentially legalizing abortion at any point during the pregnancy, even at the time of labor. 118th District State Rep. Patrick Windhorst is voicing his outrage.

“In just a few short years, the left went from ‘safe, legal, and rare’ to proudly promoting the killing of full- term babies right before birth,” Windhorst said. “I listened in shock as the Democratic Governor of Virginia went on live radio to advocate for their proposed bill and seemingly defended the killing of a baby with deformities AFTER birth. My heart sank as I looked at pictures of the Empire State Building illuminated in pink lights celebrating the signing of legalized infanticide in New York. It’s time for Illinois to decide who we want to be in the eyes of history and our Creator.”

Illinois’ current abortion law already reads similar to the laws passed in New York and proposed in Virginia and Rhode Island. Abortion in Illinois after the point of viability is only legal if it is, “necessary to preserve the life or health of the mother.” The definition of “health” does not appear in current statute and has been interpreted to allow late-term abortions for more reasons than preserving the mother’s life or physical health. The intentional vagueness and broad use of this terminology is what was just enacted in New York. Virginia goes even further to include “mental health.”

The “Illinois Anti-Infanticide Act”, filed as HB 2384, would prohibit abortion after an unborn child is viable except to save the life or serious physical health of the mother.  “The Act would narrowly define health as serious physical impairments,” Windhorst said. “This act will save lives.”

Windhorst is pro-life and is the chief sponsor of a bill repealing HB 40, which provided taxpayer-funded abortions. As a member of the minority party in the House, Windhorst also understands the political realities of Springfield at this time and is seeking to amend Illinois’ current abortion law in a bipartisan manner to eliminate the barbaric act of infanticide.

“Pro-lifers and pro-choice individuals have major disagreements – but I believe this is something we can agree on,” Windhorst said. “It should be easy and worthwhile for both Republicans and Democrats to come together and say we can’t be a state that stands for the killing of a full-term baby and especially after a baby has been delivered. We must stop this euthanasia of our children. We must never let that evil enter our State laws.”

Windhorst says he is also looking to combat the double standard within the media and broader public discourse on the issue of abortion.

“Often times, conservatives are portrayed as extreme on issues of abortion and choice,” Windhorst said. “The fact is that only 13% of Americans agree (Gallup) that we should allow late-term abortions. Democrats in New York, Virginia and nationally have taken to defending these new laws expanding late-term abortions up until the moment of birth. That is extreme.”  Windhorst urges accountability, saying, “Every media member should be asking Democratic legislators and the Governor where they stand on late-term abortions. Are they willing to defend the extreme position of legalized infanticide or will they work with us to prevent this evil?”
#####